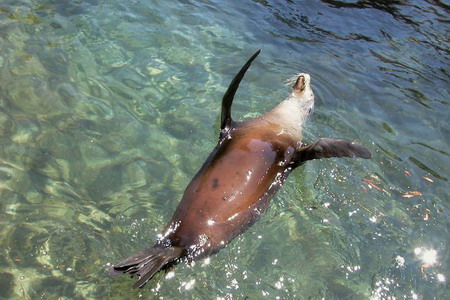 One of the characteristics of seals is search for food with their coarse , continuously growing whiskers. The seal sweeps its upper lip to and fro, using these sensitive whiskers to detect fish in murky waters.

Seals have very good vision in water. The eye must focus in both air and water so is very large and round.

Other characteristics of seals is they have a keen sense of smell in air, which allows them to detect predators. Females also use smell to recognise their pups on crowded breeding beaches. While swimming the nostrils are kept tightly shut

Seals hear very well in both water and in air. Females and pups often call to each other. Seals also make growls and grunts underwater especially during the breeding season

Other characteristics of the seals they are opportunistic feeders – they feed on a number of different prey depending on which is available, diving to around 120 metres or even 300m deep. Their diet consists mainly of fish such as sand eels, herring, saithe and whiting as well as bottom-dwelling fish like plaice and flounder. Squid and octopus are also frequently eaten.

UK seals breed in colonies where animals congregate on beaches, sandflats and in caves. Male seals often fight for access to females.

Grey seals give birth to a single pup on beaches or in hidden sea caves from July to November. Common Seals pup on beaches and tidal sandflats within tidal reach, from May to July. In both species conception to birth takes around 11 months and implantation of the embryo is delayed by around 3 months.

Grey seal pups are born with silky white coat or lunugo, which is moulted at around 9-18 days old and are quite helpless. Common seal pups are dark and motted, having shed their lanugo before birth, and can swim within 5 minutes.

Grey seal pups are nursed for only around 17 days so they must grow very rapidly consuming 3.2kg of fat- rich milk per day! The female does not eat during this time. After weaning, the pup moults and must fast, living on its stored fat for up to 4 weeks before it learns to forage and catch its own fish. The common seal pup learns to forage much earlier as it accompanies its mother on short trips during the 3-5 weeks after she nurses it. They spend much more time playing in the water from a very early stage.

Seals mate at the end of lactation. Grey seal females can breed at around 4 years old whereas female common seals must be 3-7 years old to breed and males must be 3-8 years old. Both species can mate in water Moulting During the moult seals spend much of their time hauled out of land as they need to conserve energy. Grey seals moult from December-March ( females) and March-May ( males ) in the UK and the republic of Ireland and common seals, from mid July to mid September

The main threats to the UK and Irish seals are: Interactions with fisheries Disease e.g. the phocine distemper virus (PDV) Epidemic of 1988 which killed 18,000 seals Pollution – plastic debris and toxic chemicals. Seals could be a threat from repeated calls for a cull in Scotland

For a tour in seafari clic here